Grays Covid-19 survivor who fought for his life 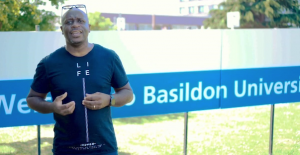 Covid-19 survivor who fought for his life

WHEN told he had to go onto a ventilator, Pastor Peter Nembhard, 52, of Grays, thought he was going to die after he was admitted to Basildon Hospital with Coronavirus in the beginning of April.

Peter, who is a devout Christian and Pastor to ARC Church (A Radical Church) which has multiple branches across London, was reluctant to go to hospital and leave his wife and four children behind.

After eight days of being ill at home with severe sweats, a high fever and a cough, Peter discussed the option of going to hospital with his friends and family.

Peter said: “I told my wife and kids that I could stay at home and try and recover or go into hospital. Sadly, going into hospital meant that no matter how long I was there no one would be able see me due to visiting restrictions.

“My second daughter Kristie-Anne shared a story and explained that going to hospital now would benefit my health later.”

Kristie-Anne, said: “When my mobile phone started to have a few problems I should have fixed it straight away as it wouldn’t have gotten worse, now it’s at a point of being irreparable. I didn’t want dad to be the same.”

Peter was taken to Basildon Hospital on 2 April and placed on a Covid ward after testing positive for Coronavirus.

He explained: “My fight in hospital was with the breathing – I was really struggling to breathe. There was one point that I had lost hope, as I thought I was going to die.”

His friends and family continued to support him with words of encouragement and their prayers.

Peter said, “I will never forget one particular nurse, Vanya Roach, who was like an angel to me. I felt as if God sent her directly to help me fight this.”

“Vanya took the time to explain exactly what was happening; she sat down and fed me and really helped me through my fight.

“I asked what I could do to assist my recovery; she said sit up in the chair or lie down on my belly as it would be easier to breathe.”

Staff nurse, Vanya Roach, who helped treat Peter while he battled with Covid said: “I’m so pleased that he has recovered and is doing well. He had such a great fighting spirit and was really involved in his recovery.”

After being on a ventilator and showing signs of improvement, staff helped Peter to get up out of bed and try walking. Peter was discharged on 14 April, a day before his 31st wedding anniversary.

Expressing gratitude to staff at Basildon Hospital, Peter said: “I’m so grateful to Basildon Hospital, I appreciate all the doctors and nurses and everyone who helped me to recover and allow me to be at home with my family for my wedding 31st anniversary.”

Kinds Inspire: Together we can help our young people to heal