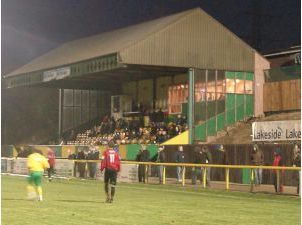 Ryman Div One North Thurrock 6 v 1 Tilbury Report by Scott Lanza FOR the first quarter of an hour this was a very tight, local derby between two teams hoping to maintain their push towards the play-offs. By the end of play it was Thurrock who can push on whereas Tilbury’s recent form has […]

Football: Tilbury held to another draw

TILBURY endured another week without a win with a draw against Heybridge Swifts.

Football: Dockers denied a point at the death

A GOAL just five minutes from time denied Tilbury all three points away from home.

Ryman Div One North Tilbury 1 v 2 Brightlingsea Regent Report by Scott Lanza THE Ryman League North Division is so tight this season that Tilbury are still in the promotion pack despite losing to second-placed Brightlingsea Regent at Chadfields on Saturday. The Dockers have three games coming up against promotion candidates and on this […]

TILBURY kept up their recent good form with another good away victory over Waltham Abbey. It was a quiet opening from both sides, with Jack Barham having the only effort

Football: Dockers prove to be a class apart

TILBURY put themselves right in the promotion mix with a great 3-0 victory against Brentwood Town.

TILBURY worked hard to earn a draw down at the Dripping Pan in Lewes on Saturday afternoon. Tilbury’s Dwade James put the Dockers ahead after 53 minutes

Football: Tilbury out of the FA Cup

After going in front early, Tilbury produced a below par performance to exit the FA Cup for another season. Conor Mead, Toby Aromolaran and Tom Anderson returned to the side and hopes were high, as Tilbury took the lead after 7 minutes when a cross into the box found Joe Nightingill who played the ball to Kurt Smith to slot home. The home side also went close when Matthews over ran the ball when through on goal.

A LATE Jack Carlile header was enough to split the sides in a close fought match and see Tilbury win there first league match of the season. Manager Gary Henty gave Harry Cook and Eli Beniot there first starts of the season, as well as a debut for Toch Singh.

You would have hoped for more of a debate on the issues and challenges in Grays. Some people judge Thurrock by Grays alone. The shopping area has ‘challenges”, the schools have challenges, like no others in Grays. The plight of the NEET is plain to see in Grays Thurrock.

VOTERS in 17 of Thurrock’s 20 wards will be going to the polls on Thursday, 3 May, and on Wednesday this week (4 April) the list of candidates was made public. There will be no polling in three of Thurrock’s wards — Little Thurrock Rectory, Stifford Clays and Tilbury Riverside and Thurrock Park.