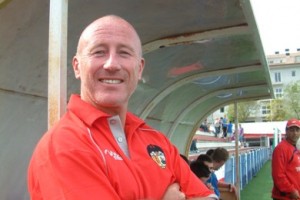 KENNY BROWN has left CD Javea. Kenny met with the players and staff after Sunday’s win over Albatera CF to confirm that he has accepted an offer to become assistant manager at struggling Blue Square Premier Division side Grays Athletic where he will join his good friend and former team-mate Julian Dicks.

He spent some time in Spain with FC Torrevieja before retiring from playing football.