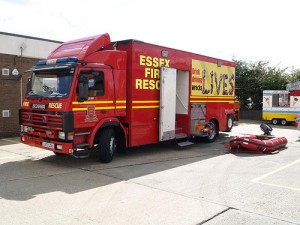 In the north of the county recently, a specialist Aerial Ladder Platform was being used at an incident which meant another unit which deals with road accidents was unavailable .

A incident occured in Clacton which meant Harlows Rescue Tender then had to travel across the county and at the same time there was a full emergency at Stansted Airport which left that incident with no ALP or Road Tender cover.

The Fire Brigades Union are involved in a long running dispute over staffing levels . The Brigades plans involve making changes in the Thurrock area.