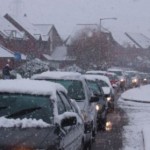 Thurrock Council has defended its preparations for the snow on Tuesday morning.

Gritting vehicles were out across the borough’s main roads on Monday, twice on Monday night and again on Tuesday morning.

The council have made the statement in the light of a number of people contacting YourThurrock complaining at the state of the roads.

Among the problem roads are: Chadwell crossroads where a number of buses have broken down; Jesmond Road, Blackshots; North Stifford, Bankfoot in Badgers Dene plus many of the main arterial roads.

Details of the routes followed are available on the council’s website (www.thurrock.gov.uk) and by following the A to Z to Gritting.

The council’s Snow Plan is in effect and its Streets Services department — supplemented by staff from the refuse collection crews — have started clearing town centres and other sensitive areas such as outside schools, doctors’ surgeries and housing complexes.

Thurrock’s five main gritting routes cover over 250 miles. Details of the council’s Winter Maintenance Plan are also available on the website and are being carried out.

There are over 500 miles of roads in Thurrock which would involve more than 1,000 miles of gritting. Although the council grits the main roads and bus routes, it is impossible to cover every road in the borough.

Others have defended the gritters and pointed to poor driving.

Grant Campbell, on business in the Thurrock area from Scotland said: “I have never seen such poor driving. People in 4×4’s who do not have the first idea about winter driving. Whether it is getting into second gear as soon as possible, cleaning windscreens or driving into a skid, they have to help themselves.”