Minister walks on new piece of Britain in Thurrock

THIS time last year there was nothing but water. Now, there is enough new land to build a town…

Shipping Minister Mike Penning MP has been walking across a brand new piece of Britain – where this time last year there was nothing but water. New land, enough to fill 4,000 Olympic-sized swimming pools, has so far been created at the London Gateway deep sea port and logistics park, which is under construction. 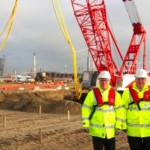 Accompanied by DP World CEO Mohammed Sharaf and London Gateway CEO Simon Moore, Mr Penning was invited to view the new land being created as part of the works.

Amongst the tools being utilised during the massive engineering and construction project is a huge vibro-compaction probe which is used to shake the ground to make it settle. The probe shakes the newly-laid ground which has been created from dredging the Thames Estuary, enabling the material to be compacted and helping the engineering process.

Mr Penning said: “This is a unique project which has the full support of the Government. It aims to create thousands of jobs, whilst removing thousands of trucks from the nation’s roads.”

Mr Sharaf said: “We were delighted to show the Minister for Shipping around London Gateway’s construction site. I believe he was impressed with the progress being made and he is welcome to visit us in future as we chart the milestones along the way.”

Simon Moore said: “The Minister’s visit emphasised the high-level support for London Gateway’s development, which has already led to the creation of more than 600 construction jobs – many for local people – and which will create around 36,000 jobs for the UK when fully complete. It is the single largest employment creation project in Britain.

He continued: “Not only will London Gateway have a significant impact on the regional economy, the new port and logistics park will also be of huge benefit to the country, as it will reshape UK supply chains for the better.”

One of the main benefits of the port development will be the reduction of lorry movements on the UK’s road network, as imported goods will be closer to the London and South East markets. This will save UK companies significant transportation and distribution costs as well as improving carbon footprints. Over 65 million freight miles will be saved every year and 140,000 tons of CO2 emissions.