Students and tutors at South Essex College celebrated today when they were officially welcomed in to London 2012’s Get Set network, in recognition of their commitment to the Olympic and Paralympic Values. 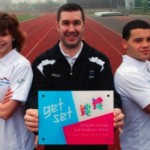 Yohan said: “The Olympics coming to London is a once in a lifetime opportunity so it’s really exciting. It’s always been my dream to compete and my fitness levels are really good at the moment so I’m feeling confident.”
The London Organising Committee of the Olympic Games and Paralympic Games (LOCOG) awarded South Essex College a plaque and certificate to acknowledge their involvement in the London 2012 education programme. They now join schools and colleges across the UK as members of a special London 2012 community – the Get Set network – and will receive access to exclusive competitions and 2012 Games related opportunities over the coming years.

Academy Manager Sport at South Essex College, Alan Pease said: “With the Olympics set to take place right on our doorstep at Hadleigh Farm in less than 18 months it’s really important for the local community to get behind it. The College has always tried to embed the Olympic values into all areas of its curriculum and is proud to be helping train the next generation of athletes. Sophie and Yohan are excellent examples of the young sporting talent there is in Essex so we all have our fingers crossed for them.”

The College will be hoping to help cultivate the future sport stars of Essex even further as it now welcomes applications for new Sports courses at its Basildon Campus, which start this September.

Alan added: “Students at South Essex College are excellent examples of how London 2012 is helping to spark young people’s imagination and inspiring them to get involved and make a difference. They have clearly demonstrated that London 2012’s education programme extends far beyond PE and sport and I hope they will motivate other young people to join their journey.”

Sebastian Coe, chairman of LOCOG, said: “When London won the right to host the Olympic Games and Paralympic Games, we made a clear promise to use the power of the 2012 Games to inspire young people.

“I am proud to welcome South Essex College in to the Get Set network for their exciting work around the Olympic Values of friendship, excellence and respect and the Paralympic Values of inspiration, courage, determination and equality.”

To earn the right to use the new education logo, and become a member of the new Get Set network, schools and colleges need to register with Get Set, showcase their student-led work around the Values via the dedicated ‘Get Set’ blog, and complete a short application form. They will receive the right to use the London 2012 education logo on their headed paper, website and school sign.

Almost half the schools and colleges across the UK are already registered as using the Get Set resources – or taking part in the initiatives promoted through the eight key themes of Get Set.

The education logo was designed by Reiss Evans (18), a design student from Canterbury College, who won a national competition in September 2009 to create an education-themed infill for the London 2012 Olympic logo.