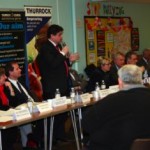 Questions ranged from housing and regeneration, through transport and parking issues, to education, public safety and play equipment during the Lansdowne Primary School public meeting in Tilbury.

The atmosphere ranged from anger to laughter as members of the council’s cabinet and its Directors’ Board answered the questions put to them and promised action to deal with the issues raised and to keep the questioners and community in general informed.

There was, for example, a heated debate about pupil numbers at St Mary’s RC Primary, but when Council Leader, Cllr John Kent, promised that the council would do all in its power to set up a meeting between the director, the portfolio holder, the school and the diocese the audience was mollified — but said the council would be held to its promise.

There were other heated comments about clean streets, but portfolio holder Cllr Val Morris Cook told the meeting she was in complete agreement and the council’s Chief Executive Graham Farrant explained that meetings would be taking place with the Environment Agency — responsible for the A13 from Wennington to the Tilbury turning, and the Dock Approach Road — within days.

Cllr Morris-Cook said: “If necessary we will do it ourselves and bill them!”

Speaking after the meeting, Cllr Kent said: “It was great, the best yet. The passion and willingness to engage with us was just fantastic.

“There is no substitute for getting out into the community, listening to what people have to say — whether they’re angry or just concerned — and showing that we’re just as concerned as they are and want to put things right.

“I have asked that four more of these events be planned in various parts of the borough, maybe even one in Grays as some people may feel intimidated by visiting the council chamber or speaking in that sort of formal atmosphere.”