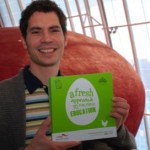 The nomination at the Heist Awards sees the publication nominated as one of the best 12 Further Education prospectuses in the country this year and is the only one to be shortlisted in Essex.

Marco Scarola, Head of Marketing and Communications, said: “Since launching last year the new College is striving to offer young people a fresh approach to learning once they’ve finished school, with new courses, new facilities, teaching methods and work placements. We’ve taken that ‘fresh’ theme into our recruitment campaign and shaped our prospectus on student feedback, even involving ex-students in the design!”

The Heist Awards recognise and celebrate the professionalism and innovation shown from the smallest regional college to global education brands. The organisers of the Awards, commented: “We are delighted to say that the quality of the entries this year has been very high.” The winners will be announced on the 26th May.

The prospectus was a joint design between the Marketing Team and Southend based designers, sixredsquares, which comprises six former BA (Hons) Graphic Design students from the College.

With many new courses across its three campuses, the College is still inviting applications for all students.