AMBULANCE clinicians get to do a wealth of different things in their roles – but delivering a baby is one of the more satisfying sides of the job. 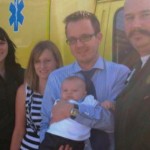 They regularly take mums-to-be into hospital when the time has come to give birth; but it’s not so common for the crew to end up delivering the little bundle of joy! That’s what happened to paramedics Paul Jenner and Laura Chaplin when they attended a Purfleet mum back in March. And last week, they met up with the family to see how baby Zach Barrett was getting on.

Karly, 28, and husband Richard, 30, were at home in Water Lane on March 2 when the contractions started. Karly, who wasn’t due for another couple of weeks, said: “Everything started at about 5pm the evening before, and by about 1am I couldn’t get out of bed. I was getting bad pains but I didn’t think it was labour.”

Richard added: “I still thought we could get to hospital but from looking at her face I thought ‘oh dear, something’s happening’ so I called 999.”

Paul and Laura were at the Barrett’s home in nine minutes, following the call at 1.52am. Laura said: “99% of the time we wouldn’t expect an imminent delivery and would just convey to hospital.

“But when we got to Karly, it all changed! I grabbed a maternity pack as the birth had really progressed and the head was further out.”

Laura was reassuring Karly and Richard – who had until then followed instructions from call taker Michelle Vickers – while Paul was taking care of the delivery. He said: “Before we know it, Zach was out and we gave him a rub down; he was a little bit blue and we gave him some oxygen but otherwise he was perfectly fine.”

Within just one hour, Paul and Laura had attended and delivered Zach and were taking Karly to hospital where a midwife was on hand to meet the newborn, a little brother for Hayden, 2.

When everyone met at Thurrock station last Wednesday, they reflected on just how quickly everything happened. It was Laura’s first ever delivery, and she said: “I’m so pleased to see him alright and looking well. We practice for these things when we train, but to actually do it is something else.”

Karly said: “I just couldn’t move, but perhaps 15 minutes earlier I might have made it out, and Zach would have been born in the car. It’s been lovely to see Paul and Laura again.”

For Paul, it was the eighth delivery he has made: “Bringing a new life into the world is a very pleasurable part of the job, and it’s great that Zach is doing so well.”

Richard said if it wasn’t for the ambulance service, the outcome might have been very different: “When I saw the crew at the door, I don’t think I’ve ever been so thankful to see someone! It was a very special delivery and I can only thank Paul and Laura, and the call taker, for their help.”