GRAYS Detachment of the Army Cadet Force (ACF) has marked the construction of a new purpose built home by burying a time capsule in the foundations. Work on the building is well underway and should be finished in time for the cadets to move in at the end of the summer along with Air Cadets from 106 Squadron who they will be sharing the facility with.

Representing the detachment and on-hand to dig the hole, were Detachment Commanding Officer 2nd Lieutenant Mick Beadle and Cadet Lance Corporal Andrew Everard (16) and Cadet David Woodrow (17). The 20 members of detachment selected the items to include in the capsule representing life in the ACF in 2011. 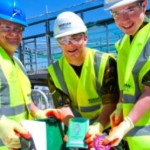 Mick, who in civilian life is a paramedic with the London Ambulance Service NHS Trust says “The lack of purpose built facilities has limited the number of cadets that we could accommodate. With our new purpose built home we hope to see this number grow. The new detachment building will give us more classrooms, secure storage for our equipment and most importantly an indoor rifle range which the detachment has not had access to on this site since the TA centre closed in 2006.”

The new building will replace the cadets former home which was in a part of the TA centre built in 1913 and was originally a tack store for the Royal Field Artillery based at the site.. The new facility is being provided in partnership with the Thurrock Thames Gateway Development Corporation and if all goes to schedule the cadets should move into their new home in September. Until then the cadets are parading in portacabins on what was, until recently, part of the Royal Mail Delivery Office off Hogg Lane.

About life as an Army Cadet, Mick says “The ACF has lots to offer young people, the opportunity to make new friends, learn new skills, enjoy adventure training and to participate in activities such as the Duke of Edinburgh Award Scheme. Over the summer we will be away on annual camp for two weeks and will also be taking a group of cadets to the Peak District for their Duke of Edinburgh expedition. On top of this we are very active supporting the local community.

“Any young person interested in finding out more about the ACF is welcome to pop down on a Thursday evening between 19.30 – 21.30hrs. We are also looking for adults both male and female to become instructors, something which I can highly recommend, no military experience is needed just an interest in working with young people.”

Will McKee, Chairman of Thurrock Thames Gateway Development Corporation, said: “The Corporation is delighted to be working closely with the Cadets to create a fantastic new facility for the young people of Thurrock to enjoy.”

“The Cadets have been very accommodating when repositioning their head quarters within the Hogg Lane site that assists the Corporation in assembling the site for the Grays Community Hospital which we are still working very hard with partners to deliver.”

Matt Thomas, Contracts Manager at Morgan Sindall, says: “The new building is technologically advanced and will massively enhance the facilities available to the Grays Detachment. The time capsule is a great way of monitoring how the cadet force will evolve over the next 50 to 100 years.”

Anyone interested in finding out more about Grays ACF Detachment should call 01245 462302 or visit http://www.armycadets.com/county/essex/home