Thurrock Council and the local Citizens Advice Bureau (CAB) have been working together to develop a fair policy on recovering outstanding debts.

The CAB has produced a report detailing some of the problems it has uncovered where vulnerable people were put under pressure by agents of the council.

The report — which is being published by CAB — also helped a council panel of members and officers create a new “Fair Debt Policy” which has since been agreed by the council’s cabinet.

On Wednesday (13 July) Council Leader, Cllr John Kent; Cllr Rob Gledhill, who was part of a panel examining the issue; and Mike Rawlings, manager of the local CAB, met to discuss the issues. 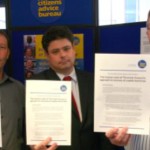 Cllr Gledhill added: “We were concerned that the council’s debt collection didn’t reflect its ethos of protecting our most vulnerable residents and to a certain extent this was borne out by the CAB report and councillors’ caseloads which had seen a major increase in complaints.

“Our cross-party panel put in a great deal of work to get the new policy developed and properly fit for purpose and I think we’ve managed that now.

“Those who go out of their way to obstruct the council’s efforts to recover money it is owed, will face proper sanctions — those who can’t pay or who don’t fully understand the consequences will be provided with help and support to pay things off.”

Cllr Kent said: “Every penny counts for local authorities across the country, and we have a dual duty — to recover what is outstanding and keep costs down for everyone who does pay, and to care for all our vulnerable residents and not cause them undue worry.

“I’m thankful to both Rob and Mike for the work they have put in and I’m confident we now have a fair debt policy which pays full regard to the competing pressures — getting the money in and protecting vulnerable people.”

2 Responses to "Fair debt policy accord between council and CAB"