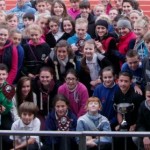 from William Edwards School excelled themselves on Wednesday 23rd November at Blackshots Park in the annual secondary schools borough cross country championships. For the fifth consecutive year the school secured the overall title winning 5 gold’s from the 6 available race categories.

Both boys and girls teams from William Edwards ran superbly well as they held off the athletes from other local schools to secure the top in the borough. There were individual medals for many athletes and the students from William Edwards claimed 16 of the 32 available borough vests and will now go on to represent the borough and run at the Essex School Championships at Gloucester Park on Saturday 21st January 2012

The year 7 teams were the first to go and had the worst start possible as both the girls and boy’s team lost 2 of their strongest runners due to sickness and injury. With their backs against the walls however, the rest of the team dug deep and ran hard. Over all team totals at the close of the first race category resulted with Gable Hall taking the gold with 105 points, William Edwards claiming the silver with 206 points and the Harris Academy taking the bronze with 237 points.

The junior competitors set to the course next and in a true display of grit and determination showed just why William Edwards has held the overall title for 5 years. Team scores at the end of the races resulted with William taking the gold in both the girls and boys races with an impressive overall score of 88 points. Gable Hall took the silver with 210 points and Gateway Academy bronze with 303 points.

The intermediate competition saw the final, and 2 most grueling races of the day with the girls having to complete 2 miles and the boys 2.5miles. The form continued however as the girls team, spearheaded by in form Gemma Holloway ran away comfortable winners to take the gold as did the boys. Over all scores for the intermediates resulted with William Edwards taking the gold with 66 points, Gateway Academy claiming the silver with 160 points and Gable Hall taking the bronze with 162 points.

As the teams recovered and slowly gathered in Thurrock Harriers stand all final scores were calibrated. Combined team scores at the end of the competition resulted with William Edwards retaining the district crown for the 5th year running with an impressive score 360 points to take the gold. Gable Hall took the silver with 477 points and Gateway Academy the bronze with 766 points.

Mr Reid, Head of PE at William Edwards School, said that all of the students have performed exceptionally well today particularly as the standard of running has risen again in the borough. Amazingly 16 of our athletes now have the opportunity to compete for Thurrock at the Essex Schools Cross Country Finals on the 21st January 2011 at Gloucester Park.

The strength and depth of running throughout the school is improving each year at William Edwards which is evidenced in the results. Coupled together with the recent success that we have had in the national competition with both our junior boys and inter girls reaching the regional finals, the standard of running from our athletes is amazing.

What has impressed me today also is the rise in standard across the borough which will again strengthen the borough team that I will be taking to Gloucester Park in January.

I would just like to thank the students for working tremendously hard today and all members of staff for giving up their time to ensure the day ran smoothly. My thanks go out to Thurrock Harriers for helping host the event and Thurrock Council for allowing us access onto the park.