On the way to the ward they stopped at the Thurrock Asian Drop In Centre at 35 Clarence Road, Grays and had a brief conversation with the residents sitting there about the services provided by this small voluntary organisation. Casie Cheong informed that there were 6454 recorded visits to this Centre last year. The C.E.O praised the work of the Centre;

The next stop was the Grays Park where the Councillors talked about making a number of improvements which are needed for health and safety in this much used park by local residents; a new name sign, removal of old benches, imroving toilets, resurfacing the tennis court, improving flower beds and replacing the iron fence etc.

At the Community College we talked about the development of old empty buildings which have been vacant for a long time and being vandalised. 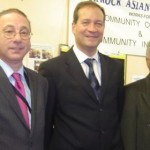 The councillors drew the attention of the CEO for relocating the scrap yard in front of the Thameside Schools for safety reasons. On the White Hall Lane we noticed the big issue of parking which could be sorted out by putting yellow lines on one side of the road near the children’s nursary.

Two other important issues were also discussed; the new building for Quarry Hill Primary School by using the vacant land near Orsett Road and the future development plans for the old buildings of Tree Tops School.
‘This was a very productive and useful visit’ said Cllr Gupta and Cllr Stone, ‘We are expecting some positive actions by the Council on all these issues faced by our residents’.