125 not out! Stanford CC begin year of celebrations with New Years day match

IT DID come as something of a surprise to receive a cricket result on New Years Day but then again this was no ordinary cricket match. It was the beginning of the 125th anniversary of Stanford-le-Hope cricket club.

A variety of warm clothing, hot soup with rolls and plenty of other warming “items” were the order of the day! The match was a 7-a-side interclub affair with the emphasis on celebration rather than serious play.

But there was an historic significance in this event as exactly the same took place 25 years ago at The Rec to signal the start of its Centenary celebrations in 1987. 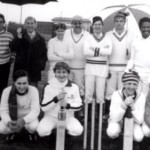 Planned highlights of the year ahead include:

Early 2012: Special 2012 Fixture Book
To include normal fixtures etc. plus statistics from the past 125 years, a timeline of the Club and many other interesting photos and articles

March: Memorabilia Evening
Players past and present will get together in the Clubhouse to look over items of interest with many amusing (and tall!) stories likely to be told.

April: Tour to Spain
A week-long tour to the Barcelona region where three matches will take place as part of the club’s pre-season training

During 2012 Season: Special Cricket Match
To celebrate 125 years there will be a special one-off match against a prestigious side

July: Cricket Festival
4 days of cricket against a variety of sides, both local and far afield

September: 125 Dinner Dance at Langdon Hills Golf Club
This grand event will round off the year in style when we hope that the current members will be joined with some illustrious faces from the past

In addition to the above there will be many other cricket and social events, with something planned for each month of the 2012 season. With both the 1st and 2nd XI scheduled to play in the Shepherd Neame Essex League’s 2nd Division this season, it is going to be a significant year for the Club which it would like to share with the local community. 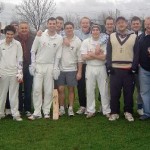 There are four people that feature in both years, John Hicks, Mark Nuttall, Peter Victory and Jon Fuller.