Police appeal after night of arson in West Thurrock

POLICE are appealing for information following the two serious arsons in Grays on Tuesday, January 17.

At around 1.45am at the Formula One hotel, Weston Avenue, Thurrock, six vans and three trailers were set alight. All the vehicles appear to have Lithuanian registration plates. Then at just before 10pm at a yard in Motherwell Way, Grays, the cabs of three petrol tankers were set alight. The fire service prevented the spread of the fires from the cabs. 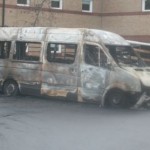 Scene preservations have been in place since the incident occurred whilst a forensic investigation takes place, and police are working closely with the fire service to establish the exact cause of both incidents.

Senior Investigating Officer, DCI Simon Anslow, said: “We now have reports of two serious arsons within walking distance of each other, so we believe the fires could have been committed by the same suspects.

“We have a team of experienced detectives examining all of the evidence thoroughly, and we are in the process of seizing all available CCTV in the area.

“Whoever is responsible should be warned that setting petrol tankers alight is an extremely serious offence, as is setting fire to vehicles outside a hotel full of people, and we will do all we can to catch those responsible.”

Since yesterday, police have stepped up patrols in the area in a bid to prevent further incidents, and police are asking people driving through the affected area and residents to keep an eye out for suspicious activity, and report it to police immediately.

DCI Anslow added: “Arsonist often brag about what they have done, or the suspects may have come home with burns. Someone in the Thurrock community knows who did this, and I appeal to their conscience to call us immediately so we can arrest them and ensure that no more lives are put in danger.”

If you have any information about either incident, please contact detectives at the South Ockendon serious crime team on 101 or call Crimestoppers anonymously on 0800 555 111.