St.Clere’s were underdogs going into the game as Forest Glade were 13 league places above them in a higher division and had also gained promotion.

St.Clere’s impressive end to the season filled them with confidence and they took the game to Forest Glade to deservedly grab a superb victory.

A single goal from Sam Russell, who converted a cross from Ryan Brabben was the difference between the two sides. 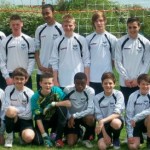