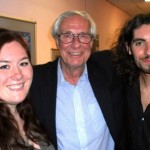 The first Thurrock International Film Festival came to a close on Saturday evening with the awards ceremony where the best of the films screened were rewarded with trophies.

Filmmakers from all over the world came to Thurrock for the climax of the festival, from as far away as U.S.A. and Brazil. Throughout the week the best of the short films submitted were screened at various locations around Thurrock to eager audiences.

The best in each category were sent to the panel of celebrity judges, which included Pauline Quirke, Jim Loach and Wendy Schaal. Audiences were also able to vote for their favourite short to win the Audience Choice award. And so the stage was set at the Thameside Theatre on Saturday when the organisers of the festival presented the filmmakers with their trophies, the ceremony also hosted the premiere of several short films.

Earlier in the week, year 10 pupils from William Edwards School spent the day at Palmer’s College where they learnt and put into practice how to plan, shoot and edit a short film. The resulting shorts were screened for the first time at the Thameside during the Awards Ceremony.

Benjamin Scarsbrook, one of the organisers, said “Everyone who has attended the festival has thoroughly enjoyed it, and we have had a brilliant time running it. We feel from the feedback from audiences and filmmakers that this is putting Thurrock on the film festival map and creating a legacy of filmmaking in the borough!”

Co-organiser Natalie Williams added “A year of really hard work has paid off with an event that has been enjoyed and talked about, we are now in the process of looking at what feedback we have been given so that we can start planning for next year.” 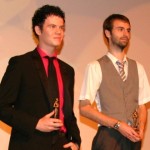 The films‘Dear Katie’ and Lord Lazarus were produced by students from Palmer’s College and were nominated for Best Student and Best Experimental respectively.

Organiser Natalie said, “We were delighted to receive such high quality films from the borough, it was wonderful to see that there are talented filmmakers producing work in Thurrock.”

The full list of winners can be found on the festival’s website www.thurrockfilm.co.uk and their blog www.thurrockfilm.tumblr.com and entries open for next years festival 1st December 2012 so, pick up that camera and get filming!