Billy Bragg’s not thinking of New England but Old Thurrock

Thurrock Council’s history maestro, Jonathan Catton, taught a well known alternative rock musician a bit of the borough’s past when the pair met up.

Jonathan met East Ender Billy Bragg to record a Radio 4 interview for a production on Road Songs to be broadcast later in the year.

Fifty-five-year-old Bragg has a music career spanning 30 years blending elements of folk music, punk rock and protest songs. He was brought up in Barking and had travelled up and down the A13 so when challenged to write a road song “as good as Route 66” he produced the A13 Trunk Road To The Sea which names the towns on the road from Wapping to Southend and including Grays Thurrock on the way.

Jonathan – the council’s heritage and museum officer, said: “The interview was supposed to focus on historical events and places along the A13 in Thurrock – Joseph Conrad and the Peasants’ Revolt at Fobbing had been suggested.

“But we were soon on to other important historical facts, including Tilbury Docks, the Rev John Pell of Fobbing who invented the division sign and the Ford production base at Aveley when we discussed the merits of the Ford Mexico car!

“I was surprised Billy had never played in Thurrock, but I hope I may have convinced him and the listeners – if driving down the A13 – to stop and discover our fantastic and unique heritage sites in the future.”

To record this episode Billy travelled the A13 and visited Beacon Gas Works, Thurrock, Hadleigh Castle and Shoeburyness to discover more about these places and to record his own memories. 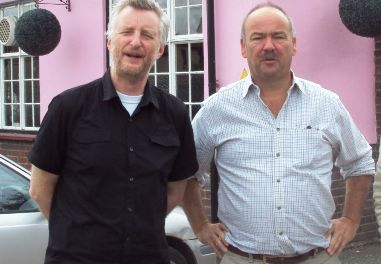