Sarah keen for a career in construction 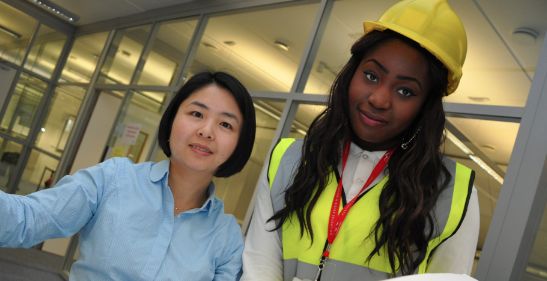 Presentations covered every aspect of the industry from architecture, structural engineering and civil engineering to quantity surveying and construction management which were delivered by such renowned construction companies as Skanska, ARUP, KSS Architects and Turner & Townsend.

Several of the companies are already working with the College to deliver the next generation of college buildings. Skanska is building the new £45 million Thurrock Campus, set to be open to students in September 2014, and were at the event to talk about structural engineering.

Skanska also built the Heron Tower, the tallest building in the City of London, and were represented at the event by Lan Geng, a structural engineer. She explained that such events were important as it gives students an idea of what to expect in industry and the options open to them.

She said: “With us working so closely with the College on the new Thurrock College it’s great to be able to give something back to the students and show them a project that is right on their doorstep. It will have a real positive impact on local people. New buildings are all around us and projects such as this can make a real difference to people’s lives, so we are as much about the people who benefit from them as we are the physical buildings.”

Skanska actively supports and promotes women working in the construction industry: Katy Dowding, Managing Director, Skanska Facilities Services is the chair of the National Association of Women in Construction – an organisation that encourages women to pursue, establish and sustain successful careers in the industry.

Taking inspiration from Lan’s presentation was Sarah Serrano-Bello, 17, from Tilbury. She is the only female student on the construction course in Southend and was pleased to see women from industry being represented at the talk.

Sarah said: “I know that construction is still a broadly male dominated area but it’s just really inspiring to see other women make it in industry and it just makes me want to be a success in my field even more.

I originally started off wanting to design bridges, but my course has given me a fantastic grounding in all areas and I’m currently looking for a work placement whilst I’m still at College. It really has broadened my horizons and I’d recommend it as an avenue for more female students.”

Now in her final year Sarah has already applied to several universities, including Birmingham, Coventry, Kingston and Greenwich, to continue her construction studies at degree level.

Although Sarah might be continuing her education elsewhere she was pleased that young people are going to get even more opportunities with the new build near her home in Tilbury.

She added: “I think it’s great that the new Thurrock Campus is coming to Grays High Street as its town centre location will mean that it is far more accessible to young people with it being close to buses and trains. If I wasn’t given such opportunities in the past then I wouldn’t be where I am now and this could be just the break that some young people need. I think its new location will make a massive difference.”