The children and adults on Phoenix Karate Club entered an inter-club competition Canvey vs Basildon to raise money for The Danny Green Fund. We raised £500 from this day event. The members of Phoenix Karate based on Charfleets Estate Northwick Road and Basildon Sporting Village all took part in a friend competition.

Phoenix nominated The Danny Green Fund as they only charity to support as Danny was a member of the club since he was five and achieved his Black Belt 1st Dan with Phoenix.

Chris and Lisa Green the parents of Danny were there to support everyone and we handed over the £500 and they really enjoyed watching the competition and thanked everyone who took the time out to support their Charity.

If anyone is interested in supporting The Danny Green Fund please visit the website www.thedannygreenfund.org.uk or see facebook/TheDannygreenfund. 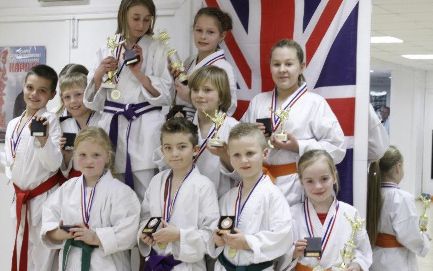 As this is an important but very small charity that wants to ensure that everyone is aware of the symptoms of Brain Tumours as BT is the biggest cancer killer of children. Registered Charity number 1150334. As a local community we have seen a wonderful response to this charity and hope that others will come forward to raise funds with us.