THE Mayor of London, Boris Johnson, today (April 16) visited Jebel Ali Port and was welcomed by Sultan Ahmed Bin Sulayem, Chairman, DP World, who explained to the Mayor how DP World’s massive London Gateway port and logistics park project, modelled on Jebel Ali, will bring savings to UK supply chains. During their meeting and tour of the port, Mr Johnson was briefed on the technology-driven operational efficiencies that have placed Jebel Ali among the top ten container ports globally and the world-class infrastructure that DP World is putting in place at London Gateway, which is on target to open for business in the fourth quarter of 2013. 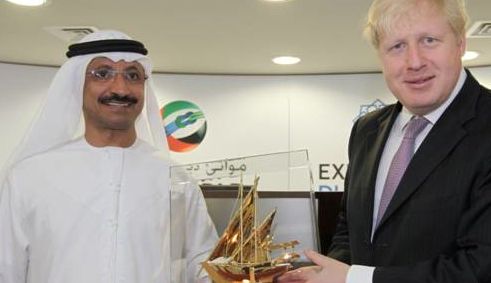 H.E. Sultan Ahmed Bin Sulayem, Chairman, DP World, said: “We are delighted to have the opportunity to show the Mayor of London our flagship facility. Jebel Ali port together with the free zone have both supported and driven the growth of Dubai and the UAE over the past four decades. We have modelled DP World’s London Gateway on Jebel Ali, knowing that a modern deep-water port and logistics park within the important London and South East market will bring direct benefits to the wider UK economy.”

He added: “Strong historic ties bind the UAE and the United Kingdom, and we believe the London Gateway project will further cement our excellent relations.”

Simon Moore, CEO, London Gateway, said: “It was excellent to see London’s Mayor in the UAE and we look forward to London Gateway being a catalyst for further inward investment into the UK. By bringing the world’s largest ships to the capital, which is Europe’s largest economic zone, we will ensure London is once again globally connected to the major trading ports of the world. This will make London, and the wider UK, more competitive for global imports and exports, reducing costs and cutting out millions of unnecessary road miles from global supply chains.”

He continued: “Our investment at London Gateway has and will continue to create thousands of new jobs in the UK. We are currently recruiting for many roles including engineers and port operations staff. We have some 3,000 construction workers on site daily, which is excellent news for the construction and engineering industry. At three square miles, this site is not only one of the biggest in the UK but one of the biggest in Europe.”

When fully completed London Gateway will have six deep-water berths capable of hosting the world’s largest container ships, a 1 million sq metre logistics park, and up to 12,000 jobs on site. The port will be the most efficient in the UK, adding an additional 3.5 million TEU (twenty-foot equivalent container units) to the nation’s port capacity. This will help meet recognised demand for extra capacity in the UK.