Intu Lakeside will make a wish come true by donating £4,000 (the average cost of a wish) to Make-A-Wish Foundation® UK. The charity grants magical wishes for children and young people fighting life-threatening medical conditions – children like Callum Leddy, a seven year old boy whose family live locally to intu Lakeside in Ilford, who wished to swim with dolphins.

Supporting local families in the community is very important to intu Lakeside and more than £27,000 is donated to causes that benefit those living near the shopping centre each and every year.

Callum was diagnosed with a genetic condition called Pelizaeus Merzbacher Disease (PMD) after his child minder and mum were both concerned that he did not kick about when lying in his cot. Aged 1½ Callum was taken to Great Ormond Street Hospital where he was referred to a neurologist and then a geneticist before finally having the test for PMD.

The condition is similar to cerebral palsy. Callum has difficulties walking because his brain scrambles the messages to his legs so he relies on his wheelchair. The condition causes leg spasms but these are controlled by medication.

When Callum was asked what his one wish was by Make-A-Wish Foundation® UK, Callum said he wanted to get up close to and swim with dolphins. His wish was granted and Callum had an amazing time, even meeting his own special dolphin called CJ.

Commenting on the experience, his mum said: “This is a wish that will stay with us forever and the only downside was when we had to return home. Callum wanted to stay.”

Izzie Peskett, intu Lakeside’s Marketing Manager, said: “intu Lakeside has a loyal family shopper base so supporting local children like Callum is very important to us. With our £4,000 donation, Make-A-Wish has been able to make truly memorable wishes just like Callum in Ilford’s come true; it’s a charity that deserves a tremendous amount of support.”

There are currently 20,000 children and young people in the UK fighting a life-threatening condition and this year Make-A-Wish will grant over 1,100 wishes. The charity needs to raise £7 million in 2013 to achieve this and receives no government funding or lottery grants – so every donation really does count. To refer a child for a wish or to make a donation, please visit: www.make-a-wish.org.uk or telephone 01276 40 50 60. 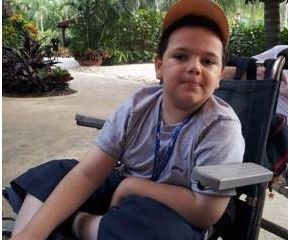