THE glitz, the glam and the goodbyes! Celebrating Success at South Essex College’s Southend Campus had them all as it recognised its student’s achievements, big or small, over the last 12 months.

Over 120 further education students from across the College’s 7000 final year students from campuses in Southend, Basildon and Thurrock were up for a whole host of awards in their specific areas of study.

Handing out awards on the evening was Principal and Chief Executive, Angela O’Donoghue CBE, enjoying her first Celebrating Success at the College since starting at the College in August last year.

In her opening address, Angela, said: “This is a real celebration of the diversity of courses, programmes and, indeed people at South Essex College. Our learners come from all walks of life; include young people from 14 upwards and adults of all ages, and a huge variety of personal circumstances.

“We are here this evening to celebrate the successes of our outstanding students. Congratulations to all of you. I hope your success this year will spur you on to even greater achievements in the future”

Special guest was former South Essex College student, Zak Perrin, who has certainly gone on to achieve great things in a short period of time. In 2011 Zak completed his Level 2 Apprenticeship in Professional Cookery before moving to France to work for Frédéric Bau; an acclaimed chocolatier, cookbook author and celebrated head pastry chef and creative director of L’Ecole de Valrhona – the most famous chocolate school in the world!

Since then, Zak has been working under the supervision of Bau at Umia, a fine dining restaurant in the south of France where the chocolatier is also the head chef. An experienced chef, Zak has cooked for celebrity chefs and pâtissiers including Heston Blumenthal and has also worked for Valrhona in their VIP stand at the World Pastry Cup!

Not bad going for someone who was sat in the audience at the very same event waiting to pick up his award only two years previously, so who knows where some of this year’s winners could end up?

Among the Thurrock award winners was Elibjonda Byberi, 25, from Grays, or Eli for short, who has shown fantastic enthusiasm, ability, and dedication to her qualifications in Hairdressing which she has studied at the College’s Thurrock Campus.

Eli said: “I’m just so passionate about hairdressing, most people think it is just about cutting someone’s hair but it is so much more and my courses at the College have given me so much, have been really in depth and my
English has really come on in leaps and bounds. I’ve learnt a lot on so many levels.”

Originally from Albania the course has also really helped progress Eli’s English as well, especially with the written terminology qualifications but also her conversational English, a must in any hair salon of course!

A dedicated student she has built up her own clientele and has brought many models into College to achieve her qualification an impressive two months early.

Her future in hair assured, Eli has already gained employment as a stylist in a local hair salon is looking to forge a long and lasting career in the industry.

In between the award segments of the show students and guests were treated to musical and performance interludes from a host of students, including the College’s We’ve Got talent winners, street-dance crew, Kayzer, and vocal medley by a trio of Media and Creative Arts Students.

There was also a music performance by Access to Music students and a blistering rendition of ‘Thank You for the Music’ by Media and Creative Arts student Jennifer Owens. 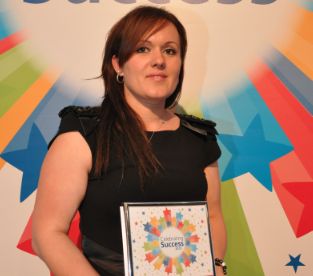