By Staff Reporter on September 5, 20135 Comments

A LABOUR councillor has accused the Thurrock Conservatives of campaigning in Stifford Clays less than 48 hours after the death of the local ward councillor.

Much-loved veteran councillor and former head of Thurrock Adult Community College, Diana Hale lost her fight against cancer on Thursday night. The funeral is set for next Tuesday. 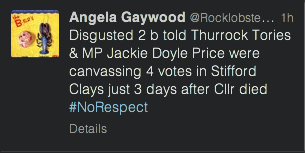 Cllr Gaywood believed that the Thurrock Conservatives were in the Crammavill Street part of the ward.

YT has spoken to both the Thurrock MP Jackie Doyle-Price as well as Thurrock councillor, Mark Coxshall. Cllr Coxshall has confirmed that they were in Crammavill Street in Stifford Clays but both have categorically stated, that they were not canvassing there.

There was a lot of political activity in the borough on Saturday. Labour campaigners were in Corringham and Stanford-le-Hope.

No date has been set for the by-election.

5 Responses to "Tories deny campaigning in ward less than 48 hours after local Labour councillor had died."