Putting the Rock back in Thurrock

FOR all you heavy rock fans out there you’ll be pleased to hear of an up and coming event taking place in Thurrock.

Essex heavy rock band Chariot and for those of you who remember the Eighties were a band who their fair share of success including European tours and selling out London’s famous Marquee. They have recorded five albums to date and are currently working on their sixth.

Originally from London the band recently reformed. Singer, songwriter and rhythm guitarist Pete Franklin is pleased to be reunited with his old band mates, John, Jeff, and Paul and although Franklin went on to tour as support band for Iron Maiden when Chariot originally split up.

Pete said “Being back on stage with the lads is great we’re not under any pressure like it was back then, it’s more relaxed and we’re seeing new faces coming to our gigs as well as our life long fans.”

Chariot are due to play in October at the Circus Tavern’s Metalwave UK concert, it will be a blast from the past with whole host of 80’s bands, headlined by Praying Mantis, with support bands such as Deep Machine and ex Iron Maiden guitarist Denis Stratton who after thirty three years will be playing an Iron Maiden set. 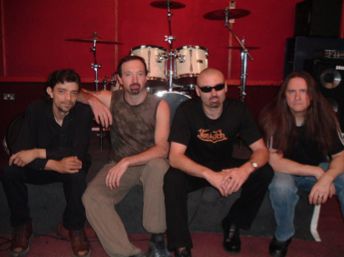