ANTI-FASCIST campaigners have discovered that the UKIP councillor for Aveley, Robert Ray once stood as a National Front (NF) candidate in the seventies.

Hope Not Hate (HNH) discovered that Robert stood for the far-right party in the London borough of Newham in 1977.

This was a time when the NF were on a crest of a wave. There was also a plethora of political rallies and clashes in the London area.

Cllr Ray was elected in May 2011 and has gone on to be one of the hardest working councillors in the borough.

Whether he will remain in the party, remains to be seen.

Earlier this year, it emerged that a candidate had been thrown out of the party when it was discovered that she used to be a BNP member. Susan Bowen, a retired sheep farmer from Boscastle in north Cornwall, had been selected to stand in the Tintagel ward on 2 May.

Cllr Ray did attempt to respond to a YT inquiry but (no pun intended) hung up once he discovered that the editor was in Europe. 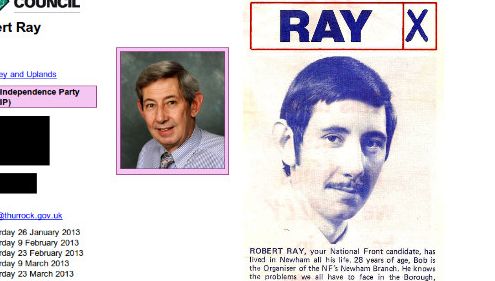