THE RSPCA is appealing for information after a rare breed dog was found in an appalling condition, chained to a large lump of concrete in Purfleet.

RSPCA inspector Lewis Taylor was called to the garages off Sussex Terrace, Purfleet, after a local resident spotted the distressed dog chained inside a derelict garage with the door missing.

The un-neutered male dog was in a terrible condition – not only obviously emaciated but suffering from painful arthritis in his back legs.

No food or water were left out for the dog and he was chained in such a way that he could barely move.

After being freed by the RSPCA, he was rushed to a nearby vets by inspector Taylor where his condition remains critical.

Inspector Taylor said: “It was a heartbreaking sight. Akitas are a large, powerful dog but this poor creature was painfully thin, dehydrated and could barely walk because of a painful condition in his back legs.

“He was also deeply distressed – which is unsurprising considering the level of pain, fear and discomfort he was clearly experiencing.

“They must have known they were abandoning him to die a slow and painful death. Why someone would do this is beyond comprehension,” he added.

The dog was in such a state that at first examination the inspector thought he was elderly, but further examination showed he may be much younger than was originally thought.

The RSPCA are urging anyone with information about this incident to call the RSPCA on the inspector information line – 0300 123 8018. Calls are in confidence. 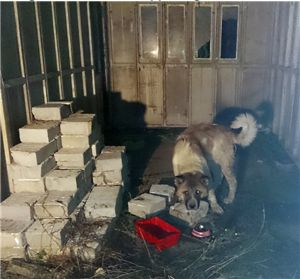