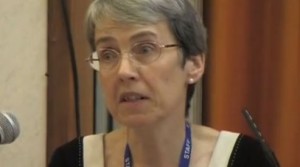 THE HEADMISTRESS of Grays Convent school is set to quit at the end of the year.

Ann Marie Brister has been head of the school since 2008 but in that time has seen it struggle to maintain its once lofty position in the exam league.

Schools, by their own volition, promote their school through statistics and some statistics do not look kindly on the College Road school.

When headteacher Phillip Kyndt retired in 2008, the school stood on top of the exam table with 61% of all pupils gaining 5 A* to C (inc English and Maths).

The school’s usual default position is that it has a high number if students taking the traditional subjects but even that figure has looked less than impressive under the Ebacc measure.

Only 17% of students entered the five subjects (Eng, Maths, a science, a language and a humanities subject). Only 12% achieved.

It would also appear that the school may be struggling to attract students. Certainly, one parent contacted YT to inform us that their daughter had been allocated a place at the Convent despite putting them down as fourth choice.

Under-fire head of Grays Convent set to quit added by admin on November 4, 2013
View all posts by admin →