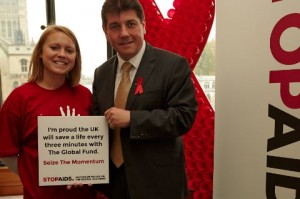 As well as encouraging the public to ‘Fact Up’ about HIV and Aids, Mr Metcalfe was demonstrating his support for the UK’s pledge of £1bn to the Global Fund to Fight AIDS, TB and Malaria, ahead of the Global Fund replenishment conference in Washington D.C. next week.

The event coincided with the launch of the Department for International Development (DFID) review of its 2011 position paper Towards Zero Infections. Mr Metcalfe spoke with activists about how far we have come in tackling the AIDS epidemic, with 9.7 million people now accessing treatment, and AIDS-related deaths declining from a peak of 2.2 million in the mid-2000s to 1.6 million in 2012.

The local MP also heard how far we have to go, with 16 million people still not accessing anti-retroviral treatment and 1.6 million people dying of AIDS-related illnesses in 2012. Mr Metcalfe joined STOPAIDS in calling upon world leaders to follow the UK’S example and fully commit to the Global Fund.

He said “I fully support the UK’s pledge of £1bn to the Global Fund and encourage other world leaders to join us in committing to bring this disease under control. I urge our government to remain focused on overcoming the challenge AIDS continues to pose to our international community.”

In light of World AIDS Day the local MP has called for the people of South Basildon and East Thurrock to ‘Fact UP’ and become more educated about the condition. The five facts are:

1.If diagnosed and treated in time. People living with HIV live a normal lifespan.

2.There is no job, which someone can’t do specifically because they have HIV

3.Treatment can mean that people living with HIV are no longer infectious.

4.Men and Women living with HIV can become parents of a HIV-free baby.

Stephen added: “For people living with HIV in the UK one of the biggest challenges is still stigma, which is often the result of ignorance about HIV and unnecessary fear. Stigma also stops some people from taking an HIV test.”

“This World AIDS Day I am joining forces with the National AIDS Trust’s campaign to encourage more people in South Basildon and East Thurrock to better understand the condition.”