Blog-spot: No Fracking Way in Thurrock?

WE WELCOME Hannah-Ellen Clare as part of our growing band of bloggers on YT.

Hannah is studying politics at Liverpool University. Hannah has a particular interest in the ecology and all issues green.

As the prime minister David Cameron mentioned Fracking, we asked Hannah for her opinion on the matter. 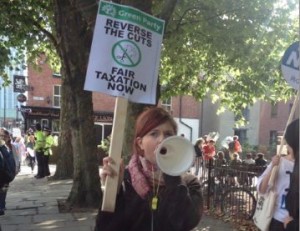 “THIS WEEK, the Government have announced that councils are able to gain 100% of business rates from fracking operations in their area. As the UK goes ‘all out for shale’ [1] many, including myself, are concerned about the impact of the method. So what’s the fracking problem?

Fracking, or hydraulic fracturing, is a process of extracting shale gas from underground rock. Drills sideways underground and then fluid is injected at a high pressure to fracture shale (sedimentary rock) to capture the gas or oil trapped within [2].

There are a number of problems with this process. Starting with water, each well uses up to 29 million litres of it. Across all the fracking fields this can lead to series problems in areas already facing droughts, like our own. This water is also pumped with chemicals and sand, rendering it mostly useless. In cases throughout the world we’ve seen water dumped in holes in the ground and into rivers. In Australia a river has been filmed visibly bubbling at the surface. [4]

So what else? People have seen their drinking water contaminated with water literally setting on fire [5] Others have discussed the impact on their health [6], and it’s not just human health – animals have mistaken large pits of dumped water for ponds and have been seriously affected as a result. Asides from this, a large proportion (40-70%[7]) of this water remains underground.

Moving on from the water, there are issues as well. In 2011, there were two earthquakes in Blackpool as a result of exploratory drilling in the area [8]. Wells are often unsafe, with abandoned wells capable of leaking methane forever [9] and the casing of wells failing. Asides from this, there are climate issues too, because as Natalie Bennett pointed out a few days ago on Daybreak it is a fossil fuel [10].

Yet the Government is keen to make this an economic issue. With the so-called bribes they’re offering to local councils to accept to allow fracking in their area, and with their insistence that this ‘has potential to drive energy bills down [and] create jobs in Britain’ [11]. But even if this is true, we cannot and should not trade in our future on this planet for a quick buck now.

We have an energy crisis, but there are much better ways we can solve it. We, as a country, should be investing more money in renewables, or even tidal power, rather than giving tax breaks to incentivise companies to destroy our future. We, as a community, need to stand up and say that fracking is not for us.

Already we’ve seen efforts in Balcombe, Sussex and Barton Moss, Manchester stand up to companies who are fracking in their areas and we need to do the same. These actions of protection, not protest, have been met with brutality from the police force. Many, including Caroline Lucas MP and Laura Bannister (North West candidate for the Green Party in the European Elections this May) have been arrested for their efforts. Police have been caught throwing disabled people and rough handling 82-year-old Anne Power, a true hero of the Barton Moss Protection Camp. Not only do we need to stand up to the companies doing this, but apparently, our own state.

According to Greenpeace our area isn’t currently under threat, but with the Government’s enthusiasm for this method of extraction [13], it could be soon. Sign here to show that Thurrock is #notforshale

For more information, please check out some of the sources I’ve given below, but there are hundreds more out there. I thoroughly recommend looking at the sources on Frack Off’s website (frack-off.org.uk) as well as watching Josh Fox’s Gasland 1 and 2.

[2] For a more thorough explanation of this process, please see New Internationalist 468, available partially on their website

[12] Information on the police reaction can be found on https://www.facebook.com/BartonMoss?fref=ts