OCKENDON resident, Deborah Awe has continued her fundraising efforts for The Dream Factory charity by organising an event at her school.

Brentwood prep, year 4 pupil Deborah, eight, was first struck by the work of the charity when she met a new friend who had an incurable condition. She felt so moved that she decided to do something to help and was keen to involve her fellow pupils to arrange a charity day with a difference.

She had already donated all her First Holy Communion gifts to The Dream Factory and then decided to organise her own fundraising event raise awareness of the charity.

She created an online JustGiving page and has so far raised over £1,000.

She wrote to the children’s entertainment network Nickelodeon for support and the Nickelodeon team offered to help Deborah by supplying a special guest for her event.

Deborah invited SpongeBob SquarePants to make a special appearance and in the run-up to the event held coin collections with support from her sister, Bernice, and her parents at various venues including Asda Living at Lakeside Retail Park, and at the Retail Park Ground with kind permission of retail park owner Land Securities.

She also received a initial generous donation from HW Wilson Ltd which held a raffle.

Deborah received donations, gift cards/vouchers and complimentary tickets from many other local businesses in and around South Ockendon where she lives with her parents.

She also received many individual donations both offline and via her Justgiving page.

On Friday, December 13, Deborah – with the support of her school and classmates – held her Nickelodeon event.

Deborah’s father, Emmanuel, said: “It was such an incredible surprise to all the children. Although there were many publications in the school’s newsletter about the event, all the pupils were so astounded but extremely happy to have such a unique event at their school.

“They were all aware of The Dream Factory after the charity’s founder, Avril Mills, attended the school to speak to the children at the headteacher’s assembly and many pupils had the opportunity to ask questions on the activities of The Dream Factory.

Headteacher Jason Whiskerd said: “This is an experience I can never forget. Deborah and her class have indeed worked hard to organise the 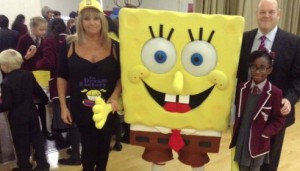 wonderful charity events and we are all extremely proud of their achievement and support of The Dream Factory.”

Deborah also held a cake sale co-ordinated by pupils in her class and with the support of her form tutor Sue Sharpe.

Many parents donated decorated cakes and there was a special cake donated by Bitemecupcakes in Brentwood.

Mr Awe added: “With another appearance from SpongeBob the atmosphere was great and all the children had loads of fun. They were so excited and SpongeBob had his photograph taken with many of the kids.”

Mr Whiskerd said: “This is an experience I can never forget. Deborah has indeed set a pace which we are proud to be part of.
“We shall continue to show our supports in every possible way for her chosen charity, The Dream Factory She has performed wonderfully well and I’m proud of her achievements.”

Deborah said: “I am very grateful for the immense supports from all the pupils in my class, Mrs Sharpe, Mr Wishkerd and all members of staff and everyone who has supported me to make my fundraising such a great success.

“The support has been overwhelming and I am sincerely grateful especially to Nickelodeon who supported me all the way, to my parents and particularly my sisters I say thank you.

“The day went really well and we had lots of fun and raised lots of money to help other children. I am happy that the day was a success!”

A photo session saw the children photographed with SpongeBob, courtesy of Cinnamon Photography in Brentwood. This and the raffle raised a further £120.

Deborah’s mum Ebipeju said: “This has been a great success and I’m so proud of the work Deborah has been doing. We shall continue to give the support needed for her to achieve her dreams.”

Mr Awe said: “Words alone cannot express how happy I am seeing Deborah understanding the need to helping other children. I am particularly grateful to Nickelodeon for supporting Deborah. This has been such a brilliant success.

“All the kids had loads of fun and the awareness already created would go a long way in helping her chosen charity. I am so proud to be a part of this fantastic success.”
Deborah has so far raised over £1,000.00 with further coins collections and raffles arranged.

The Dream Factory founder Avril Mills said: “Deborah’s efforts are a fantastic tribute to young people. I would like to see more young people like her helping others.”

For more about The Dream Factory charity visit
http://www.yourdreamfactory.org/