Stanford 1st xv played hosts to local rivals Pegasus in the 2nd leg of their league meetings. Stanford had been found wanting on their visit to Pegasus so wanted to give a better showing this time round.

The game didn’t start well for either side with the referee being very late to the match disrupting the normal pre match runs for both teams. The weather threatened to make the game a miserable affair with high winds but thankfully the rains held off.

Pegasus started the stronger of the two sides and their heavier pack was dominant in the scrums. Pegs had the first chance at points with a penalty after 5 minutes but the winds were to prove a kickers nightmare for both sides. Pegasus continued to press forward and after 8 minutes of play they pretty much walked through several poor Stanford tackles to score a try and being under the posts meant the extra 2 points was added.

Stanford stepped up another gear and with Calum Reid varying the attacking play he out foxed Pegasus with a deft kick into space with Matt Rumble was first to react the bounced popped up nicely and Matt dabbed down bringing Stanford back into the game.

Pegasus still pushed forward but Stanford was strong in defence. After several minutes of close contact play Pegasus about 10 metres out from the Stanford line tries to move the ball wide, but a lazy pass was intercepted by Liam Morley who sprinted the full length of the pitch to touch down next to the Pegasus posts. Calum Reid added the extra 2 points to push Stanford in front.
Just minutes after a lapse again in the Stanford tackling allowed Pegasus to dance through missed tackles and score followed by the conversation. Right on half time Pegasus made a try of their own making using phase ball and pushing the ball out wide, 19 – 12 at half time to the visitors.

The second half was a less eventful affair with Stanford making changes to the pack which didn’t give Pegasus so much dominance and both teams finding he windy conditions hard to control. With only 5 minutes for play left Pegasus scored their fourth and final try to close the match 24 -12.

A much closer game than earlier in the season and a game that was both entertaining and error riddled. 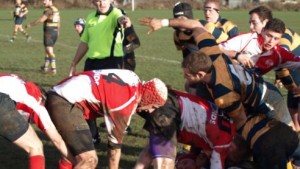