STRIDE ON 2014 is coming to the Thameside Theatre, Grays from 5-8 March 2014 and promises to be another great show. Scouts and Guides from across Thurrock have been rehearsing every Sunday since the beginning of October to put together their traditional annual “Stride On” Gang Show, which they first staged in 1968. This year’s Gang Show is earlier than usual so don’t delay get your tickets today to get the best seats in the house! 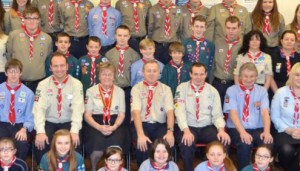 The Show’s Director Jan Thurnell, who is officially the longest serving Gang Show Director in the world said, “ Gang Show is a great opportunity for the youngsters to perform in front of a live audience, which they do with a high degree of professionalism doing both themselves and their leaders proud!”

This year’s over 50 strong cast aged 9 years and upwards are supported by a similar number behind the scenes, to deliver a show containing a great mixture of glamorous traditional and modern musical numbers, entwined with some funny comedy sketches giving a nice balance of humour, whilst retaining the traditional core of Ralph Reader elements. Ralph Reader was the British actor, theatrical producer and songwriter, who was best known for staging the original Gang Show.

Tickets are priced at Adults, £10.00, Children/OAP’s £6.00 from Wednesday Eve to Saturday Matinee and Adults £11.00 and Children/OAPs £7.00 for the Saturday Eve performance. Tickets are available from Tracey Clay on Tel: 01375 378863 and for more details about the Gang Show, please visit www.thurrockgangshow.org