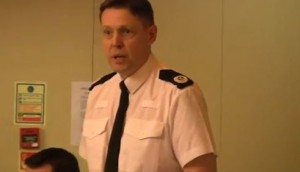 ESSEX POLICE received a polite but intense grilling from Thurrock Councillors at a full council meeting in the civic chambers on Wednesday night.

Assistant Chief Constable Maurice Mason and chief supt. Andy Prophet took the councillors through the Evolve programme. The programme is described as having: “The aim of designing and delivering a policing model which is flexible and sustainable, allowing Essex Police to provide the best possible policing services to our communities for the years to come”.

But for many of the councillors present, there was a concern that this cuts would mean less police on the streets of Thurrock. Others expressed a concern that Evolve would link up with strategies such as Operation Insight that appeared to be smoke and mirrors programmes.

Both officers continued to stress how recorded crime was down. Infact they mentioned it ten times in 45 minutes. When asked about why certain categories were up, they stressed that this was because people had more confidence in reporting crimes in this category.

Below is a 40 minute film, which shows the officers taking the councillors through Evolve, councillors firing a number of questions and both senior officers answering them en bloc.