THURROCK teachers marched en masse in Chelmsford as part of a day of action over employment conditions.

The National Union of Teachers (NUT) is unhappy at education secretary Michael Gove’s plans to increase the pension age to 68.

The Essex Chronicle spoke to a number of teachers

Among them was Eric Charlton, a theatre studies and drama teacher at Great Baddow High School.

55-year-old who has been teaching for 33 years said: “For an education secretary Mr Gove doesn’t seem to know much about what goes on in schools. 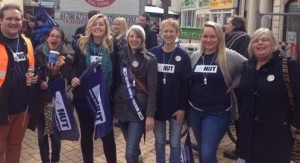 The Government has said that there was no basis for the strike by the NUT while talks were progressing.

Jerry Glazier, 61, the NUT National Executive member for Essex said: “NUT is very determined to pursue their campaign against performance related pay and pensions. We have tried to get the government to listen to all of this, but Michael Gove is barely listening to us.

“We hope to bring attention to parents of what is going on in schools. We are very fearful of the effect that the new policies will have on prospective teachers. We need to continue recruiting the best teachers.

“These changes will do the exact opposite.

“If we felt that Gove was genuinely listening to us, there wouldn’t be a strike today. There is no alternative but to take strike action today considering the circumstances.

“Long hours are getting worse, the vast amount of teachers working in a secondary school are working over 55 hours a week. Young teachers are leaving after four or five years because of this.

“We want teachers to concentrate on what they should be doing – teaching children.”