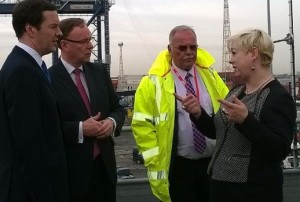 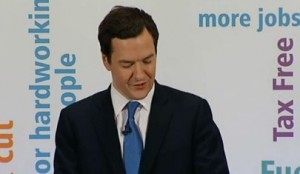 THE Chancellor George Osborne chose the Port of Tilbury as his venue to praise what he described as “the biggest reduction of business and personal tax in two decades”.

Dozens of Thurrock businesses were invited to a special gathering at the cruise terminal.

Mr Osborne then went on to speak to the world’s media in a speech that claimed stability and confidence are taking shape in the economy as a number of tax changes take effect.

The speech comes as the amount of money people are able to earn before paying income tax rises to £10,000 this week. In addition, corporation tax will be reduced by 21%, changes to business rates will come in effect and there will be cuts to employers’ National Insurance Contributions (NIC).

Mr Osborne said “This week, we follow the new way, our way.

“Backing businesses by cutting their taxes so they can create jobs, cutting the tax on hard-working people so their job pays, and holding back welfare rises and imposing more conditions on those claiming the dole, so that getting a job pays more.”

He said : Tax cuts are the biggest in a generation and claim that while the UK is creating jobs at a rate three times faster than has ever been recorded, it is useless if we continue to pay people to stay on benefits.