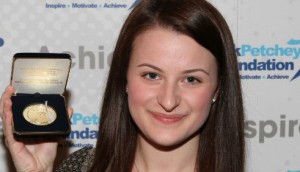 The event honoured Achievement award winners aged 11-25 who received medallions to go with their framed certificate and a cheque for £200, already presented. They were nominated by their peers and leaders, winning awards for a variety of achievements but mostly for doing their best.

Five adults were celebrated with Leader Awards who have demonstrated, in an outstanding way, an ability to motivate young people. They received a medallion and a framed certificate.

A stunning £1 million has been awarded by JPF to youth organisations in Thurrock funding started in 2000.

Winners included Tyler West, aged 17, from the Gateway Academy, part of the Gateway Learning Community Trust. Tyler is an outstanding young lady who takes time to help in all areas of the Academy. She supports the Free School, encourages her Sixth Form peers to maintain the Common Room and has made an outstanding contribution to the Sixth Form and her studies. Tyler displays a sense of leadership and maturity beyond her years. She supported Extended Provision in making arrangements for students volunteer at an event attended by the Mayor and is a real asset to the academy.

Tyler is a role model for the whole Academy, always going above and beyond what is expected of her. The grant award was spent on Year 13 / 14 residential to Wales. This trip supported students to team build and increase their confidence in preparation for University and the work place. For further information contact Tyler West Tyler.west11@hotmail.co.uk 7983796719. JPF Coordinator is Lorraine Fugl extendedprovision@theglc.org.uk

Danielle Chegwidden, aged 14, from Hathaway Academy. Danielle has received a nationwide prize for her work on PxS. This is research completed during the summer holiday 2013. Her work, of outstanding quality, was presented by Danielle to an audience of her peers and adults. Danielle requested the funding was spent on replacing of one of the PE Team Kit now it has become an academy and changed name. For further information contact Danielle Chegwidden dave@chegwidden.co.uk 07739317975. JPF Coordinator is Dianne Whippey d.whippey@hathawayacademy.attrust.org.uk

MJ Aderinto, aged 18, from Palmers College. MJ is involved in all aspects of College life. She is the President of the Student Executive, part of the Learner Voice group and Christian Union Leader. She is dedicated to the College and helping other students achieve. For further information contact MJ Aderinto Mj.aderinto@gmail.com 07446292147. JPF Coordinator is Alison Ross aross@palmers.ac.uk.

Chantelle Smith, aged 12, from Gable Hall School. JPF Coordinator at the school David Stevens said “Chantelle has been successful in a young writer competition and as a result has had four of her poems published in ‘Animal Antics and Spring Awakenings – New Beginnings’. This is an absolutely huge achievement and something that will be with you forever. It goes to show how hard work, determination, self- belief and creativity can be rewarded. Well done Chantelle!” Chantelle wanted to put her money towards buying some Kindles for the school library.  For further information contact Chantelle Smith tonyfatboy@blueyonder.co.uk 07870132352. JPF Coordinator David Stevens David.Stevens@gablehall.com

VIPs attending the event included Mayor of Thurrock Cllr Tony Fish who said “I have been to a variety of different Jack Petchey ceremonies and I’m always impressed with how young people get recognised for their achievements in such a positive way.”

Inspector Lee Argent said “In my job we quite often see the worst but coming here and seeing the best of Thurrock youth is very refreshing and rewarding. It’s good to know that the future of Thurrock is in safe hands!”
The Jack Petchey Foundation was established in 1999 to recognise the positive contributions young people make to society and to support them in achieving their potential. It has invested £85 million to a wide range of 2,000 youth initiatives across London and Essex.

Founder, Jack Petchey CBE, aged 88, said “I am passionate about our awards scheme which enables young people to be recognised, valued and rewarded for their achievements and positive contributions to society.”