A PRESENTATION full of fun, confidence … and song … brought the efforts of the Thurrock Prince’s Trust Team Six to a close on Wednesday (16 April) evening.

The team’s dozen members told the audience at the Culver Centre in South Ockendon how they had come together, raised well over £1,000, worked for charity and found either work or the confidence to start a university course.

The 12-week courses see participants carry out voluntary work in the community, raise funds, have a week’s residential course and secure a series of qualifications in Food and Hygiene, First Aid, and Health and Safety, as well as the Prince’s Trust national Certificate Level 1 Employment, Teamwork and Community Skills.

Team Six’s chosen charity was the Karis May Darling Foundation and they raised £1,200 by holding a coffee morning, car wash, sponsored walk and quiz night which also pulled in a further £800 worth of donations.

In weeks five and six of the three-month course, the team planned and then decorated, painted, and put down a pathway of slabs and a patio, as well as painting furniture and planting roses at the foundation’s headquarters in Corringham Park.

Later, the team also worked with the Karis-May Darling Angels, staff and volunteers to put on an Easter fun day where the park was full of families enjoying activities including bouncy castles, games, a barbeque, music and an Easter egg hunt. 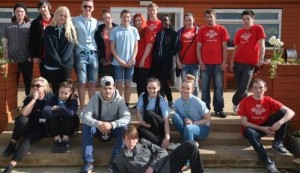 PC Dave Henderson from the Metropolitan Police, was seconded to the Thurrock Council youth team which runs the Prince’s Trust in the borough for three months to enable the young people to realise any stereotypical image of police offices was wrong – and for him to develop a better understanding of young people’s issues.

The search is now on for the next Prince’s Trust team aimed at unemployed people aged between 16 and 25 which starts on 26 May. A taster day will be held on 19 May at the Thurrock Adult Community College in Richmond Road, Grays, between 10.30am and 2.30pm. Young people interested in taking part can call or text 07795644675, or just come along to the taster day.