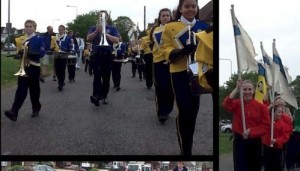 Marching Brass were given the honour of leading the St George’s Day Scout Parade which started at Hathaway Academy and concluded at the Blackshots Playing Fields in Grays, Essex.

This was the first time that a marching band had led the parade which involves more than 1,000 members from all areas of the Scout movement. The band were extremely well received by everyone present and also along the route, playing selected parade music as well as some of their 2014 summer competitive show entitled ‘The Sound of Magic’.

Joanna Crisp, Corps Director for Thurrock Marching Brass commented on the day “I am so proud of each and every member and all those surrounding them including my staff who joined in on the parade for their achievements today. Some of the tunes the members have only just started to learn, but they did extremely well and the feedback we have received has been very positive. To lead such an important and worthwhile parade as the St George’s Day Scout Parade within the borough like this just shows that the community is a strong one.