Is this the next Aaron Kiely?

OUR coverage of the local, national and european elections is a simple business. We don our anoraks, we wander around the borough and ask candidates a few questions and write the story (and get the predictions wrong-Ed).

In some ways, without the stories and without the co-operation, we don’t have a business. Bit dramatic but we get our drift.

We happen to think that the grass roots coverage of local issues is best served by getting out into the wards. Often, when we film, we approach or are approached by a local resident who makes a point about something that irks them in their ward. On Thursday it happened in Little Thurrock Rectory and in Grays Thurrock.

The latest refusenik is the Labour candidate for South Chafford, Felton Flavius. Fair enough, Felton initially told us he had never heard of us and we did the usual burning martyr thang. He then told us how busy he was as a lawyer and mediator. Now this line, we have heard before and it always rings alarm bells. Another Labour candidate turned down a number of opportunities and told us that they had job plus domestic commitments etc. 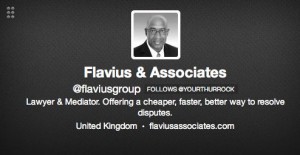 This just rings a little alarm bell for us and may or may not the same for your good selves. We just think it is only right that before the taxpayer hands over the £7,000 plus a year, that they should know that their councillor may or may not be able to fulfil all their functions.

We are sure that council leader, John Kent and his team will understand that as many of us have seen the absent councillor Kiely consume over £25,000 then we all want to make sure it is not a mistake that he repeats.

Mr Flavius told us he is a regular contributor to Thurrock Business Radio and did invite us to hear him preach at his church on Sundays. However, it is an interview we wanted and not a sermon…

Labour believe they have a real chance here and tell us they are working hard in the ward. We say, good luck to them. As Carl Morris (didn’t he beat JDP by 1100?-Ed) once said: “Look, the press. If they ring, ring them back, give them a quote and they go away happy. Otherwise it is rattle and pram time…..”