Neil’s Blog: What does this say about Thurrock?

This is Fly-Tipping, Jim. 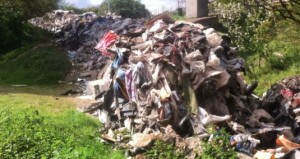 I got a dog for Christmas. Well, when I say ‘I got a dog’, I mean that we got our two little boys a dog. Anyone who has ever bought their kids a pet will know exactly what I mean. I have yet to see them step outside to take the dog for a walk in anything other than glorious sunshine. I have been out in gale force winds, temperatures scraping zero and horizontal rain. All that said, however, I’ve loved every minute of my explorations with Duracell, or as he’s more commonly known, Percy.

I’ve lived in South Ockendon all my life. I’ve heard people say that once you’ve visited Ockendon, you’re never likely to leave, and not necessarily in a complimentary way. I thought I knew every nook and cranny of the town, but getting out and about with the dog has led me to places I have never seen before. The greatest revelation on my relentless pounding of the walkways and byways of this little town has been Davy Down. I’ve known of it, and heard about it and even been there but never had the genuine pleasure of exploring properly.

I’ve been in awe of the magnificent Victorian architecture of the pump house and the viaduct. I have seen the sun rise and set, casting the most glorious shades of sunlight across this little piece of perfection. I think the dog has enjoyed it too. He’s certainly found fine sport in chasing the winged wild life across the meadows.

There is, though, a blot on this otherwise wonderful landscape. Davy Down leads westwards until you hit Ship Lane, Aveley. Eventually the ever busy A13 and M25 hove into view, rising out of the meadows, across enormous concrete and steel bridges. This, however, is not the blot. I’ve always found a strange beauty in the sight of nature and industry side-by-side. The blot lies underneath one of the bridges.

I was literally stopped in my tracks by the sight of an enormous, winding tailback of rubbish which snaked off into the distance. The dog chased after anything which moved and chewed anything that didn’t while I stood utterly in awe of the sight. This is fly tipping, Jim, but not as we know it. This is fly tipping on a large scale. On first look, I couldn’t even work out where it came from or where it started. I imagined skip lorries lobbing their refuse over the side of the bridge in the dead of night, sneaking around like some inconsiderate refuse ninjas, but it was more ordered than that. On closer looks though, it seems that there is an entrance from the A road and that this is a well-known spot for dumping anything from unwanted mattresses to fridges and bits of old banana.

At one point, it crossed my mind to sift through the detritus and make a few bob on eBay as there is always someone who is after old tires or vintage clothing, but there is a very serious side to this. One man’s place to relax, it seems, is another man’s place to abuse and destroy. In a borough such as ours, we are lucky enough to have some wonderful havens of nature among the growth of industry and housing and this wonderful plot of land which links Ockendon and Aveley, is one of them. It is sad that there is an ever growing mountain of rubble which is threatening to spoil one of Thurrock’s most pleasant walkways. The rubbish, of course, isn’t just confined to this barely organised tape worm of filth. The wind picks up parts and scatters them near and far, and so the tell-tale signs are there before the actual mountain comes into view – the walker is welcomed by a steady flow of plastic bags and crisp packets and the odd tornado of trash swirls upwards under the road.

The saddest thing, though, is that you would assume that the authorities are very well aware of it yet nothing has been done. It isn’t as if this is something that has happened over night – there are surely dozens of skip loads of debris there which will eventually begin to pose a threat to the wildlife, if it hasn’t already. I have been lucky enough to visit some of the most beautiful places in the country on foot and have always had to remind myself that Thurrock can boast some places which a comparable to many, more revered locations around the country. Davy Down and Brannett’s Wood are two such places. For example, if you picked up Brannett’s Wood and set it nicely in Nottinghamshire by Sherwood Forest, it would not look out of place in terms of its own natural beauty. What is different, however, is the way that these places are maintained.

It would be right if there was more pride in what we have here on our doorsteps in Thurrock and allowing such a situation to arise is not going to build that sense of pride. Come on Thurrock, we can do this better.

The fly tip is under junction 30 of the M25 on land that is owned and controlled by the Highways Agency. The agency is aware and the council is urging them to act on it as a matter of urgency.

The council is offering to assist in the removal (at a reasonable charge) and will continue to encourage the agency to act on the problem urgently.

One Response to "Neil’s Blog: What does this say about Thurrock?"