One of Thurrock’s new major industrial projects is celebrated for contribution to the area’s regeneration.

At a ceremony held last week in St Albans, The Backstage Centre won the RICS’ East of England award for Regeneration, and was also highly commended in the category of Community Benefit.

The RICS Awards aim to recognise the most inspirational initiatives and developments in land, property, construction and the environment. When considering the regeneration award, judges looked for a scheme that has conserved or improved the environment in a way that has contributed to the viability of the area. The regional win puts The Backstage Centre in the running for the RICS’ national regeneration award.

Now in its second year of operation, The Backstage Centre is a £13 million training and rehearsal facility for the theatre and live music industries. It is part of High House Production Park, a 14 acre cultural industrial business zone which also includes the Royal Opera House’s Bob and Tamara Manoukian Workshop and the ACME High House Artists’ Studios.

The Backstage Centre was built by Creative & Cultural Skills, the organisation responsible for the training and development of the creative industries’ workforce, in response to an identified need for over 6,500 new jobs in the live music and theatre industries by 2017.

“We’re delighted with the recognition of our contribution to the regeneration of Thurrock, and also to be commended for our work for the community. From the outset the High House project was about providing a reason for our world-class creative industries to come to Thurrock, and also to encourage local talent to stay in the area and aspire for the best jobs.

“We’ve come so far since opening 14 months ago, with the likes of Leona Lewis and Diversity using the space to rehearse for world arena tours, and the RICS award will serve to further our reputation as a major new player in the creative industries. The best thing is that the more the building is used by the industry, the more opportunities we’ll be able to provide to the local community, so it’s looking very positive for the future.”

“We’re now looking forward to the next phase of development at High House Production Park, with work due to start on the Royal Opera House’s Costume Centre in June.”

“The RICS Awards East of England judges were impressed with what is perhaps a world class training facility in Thurrock. The Award recognises that The Backstage Centre is attracting students, users and visitors from far afield and in turn this has brought about jobs and opportunities for local people. 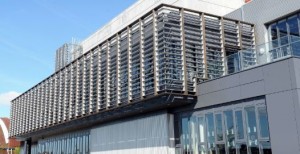 The Backstage Centre is a central element of High House Production Park and fittingly provides a stunning facility.”