THE CHADWELL community was in celebratory mood after they opened their community hub.

The mayor of Thurrock, cllr Tony Fish was there to open the hub.

Mayor of Thurrock Tony Fish said: “As a local resident I feel the centre has great potential to develop services that have the flexibility to meet the community’s needs, to create more active citizens in Chadwell, and to make our community stronger and more resilient. I wish it well for the future.”

Chair of the management boardPeter Saunders said: “The Chadwell St Mary Centre opened formally this morning and is currently based in Chadwell Library; the Mayor Of Thurrock, Cllr Tony Fish, cut the celebration-cake and declared the Centre open.

“This project is the culmination of work by a team of local residents (all volunteers) following on from a series of meetings with local residents and a survey of residents conducted last October.

“The Centre will be open Mondays and Thursdays initially, from 10am through 1pm and as well as providing a drop-in will also give access to local services and particularly those services that residents have said they want to see.

“Thurrock Council has been guided by residents and has installed a public toilet in the library, together with four new computer-terminals, and has refurbished the exterior of the building.

“The Centre is staffed by volunteers and provides volunteer-opportunities for applicants wishing to get involved in this kind of activity, as well as signposting to other services and facilities locally. 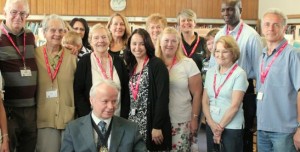 “The project forms part of Thurrock Council’s commitment to Asset-Based-Community-Development, and the council together with Thurrock CVS have been involved in the project from the outset.”