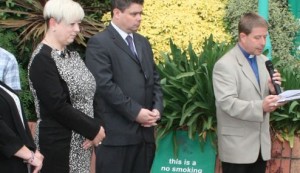 100 people paid tribute to the armed forces outside the Civic Offices in Grays on Monday (23 June) morning.

Ex-service men and women, councillors, council officers and members of the public joined Deputy Mayor of Thurrock, Cllr Sue Gray; Thurrock MP, Jackie Doyle-Price; Leader of the Council, Cllr John Kent; and the Rev Darren Barlow in a half-hour ceremony leading to the raising of the armed forces flag.

Cllr Gray said: “I think it is important that we take time out of our busy lives to show respect for our armed forces, for people who put their lives on the line so the rest of us can continue to live in peace – and that’s what we’re doing here today and what people are doing across the country and the world.

“I would ask that everyone here takes a moment during this short ceremony to think of the reasons behind it and to ponder its importance to us all.”

And Cllr Kent added: “We are here today to honour these extraordinary people from all the services. They wear different uniforms, have a unique set of traditions and perform different missions, but when I think of those serving in our armed services, regardless of branch, I think of one word – sacrifice.”

The Rev Barlow led prayers and Ms Doyle-Price also spoke of the services’ varied and ever-changing roles and commitments before raising the flag as the national anthem played.

One Response to "Borough pays tribute to armed forces"