By Staff Reporter on July 22, 2014Comments Off on UKIP councillor Robert Ray pleads not guilty to drink-drive charge 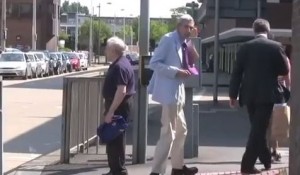 THE LEADER OF Thurrock UKIP, cllr Robert Ray has pleaded not guilty to a charge of drinking and driving.

Dressed in a light blue jacket, light trousers and a purple tie, the Aveley councillor only spoke to confirm his full particulars and then enter a plea of not guilty.

It is alleged that on June 13th after a UKIP conference at Orsett Hall, Ray, of Purfleet Road, Aveley, got behind the wheel of his Silver Peugeot car when he was over the limit.

Police were called and he was stopped as he left the car park. A breathalyser test then showed that Ray was allegedly twice the legal limit.

Prosecuting, Sam Doyle said: “Hotel staff contacted police to report that a drunk couple were about to leave the premises. They said members of staff had approached them and asked them not to drive home but they were ignored.”

Ray’s solicitor, Jeremy Sirrell told the court that their case would be based on a legal issue and special reasons.

The case was adjourned for witness statements and CCTV to be gathered. Ray was released on unconditional bail and will next appear at Basildon Magistrates’ Court on 11 September for a plea and case management hearing.