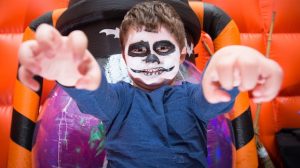 HUNDREDS of trick or treaters received a bumper haul from intu Lakeside’s spook-tacular shops and restaurants this weekend.
Build-a-Bear Workshop, F.Hinds and Hamleys were among a number of high street names taking part in intu’s big trick or treat event on Saturday.

Scary shoppers were on the hunt for the carved pumpkins on display in shop windows at intu Lakeside which signalled that a tasty treat, or terrifying trick, lay in store.

More than 250 little monsters in Essex took part in the the big trick or treat, one in a series of events at intu shopping centres up and down the country which attracted more than 3,500 children across the UK in total. Customers taking part made donations to intu Lakeside’s 2016 charity, Brainwave, and over £147 was raised for the charity in total.

Ben Leeson, Marketing Manager at intu Lakeside said: “We wanted to make Halloween ‘fangtastic’ for families in Essex by teaming up with some of our most popular shops and restaurants to provide a real safe haven for trick or treaters looking to escape the cold and wet.”

“intu Lakeside’s big trick or treat events took place following a fun-packed week of Halloween activities at the centre and it’s been great putting a smile on the face of the hundreds of mini witches and warlocks who took part.”

The big trick or treat weekend was run by intu Lakeside as part of its mission to ‘make it fangtastic’ for families this half term, with free activities like pumpkin carving and scary mask making taking place at every one of its shopping centres throughout the school holidays.