Thurrock Labour out on the Grays’s doorstep 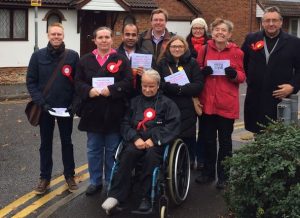 THURROCK Labour were out and about this weekend listening to local residents and hearing about issues and priorities in Grays Riverside.

Cllr Martin Kerin said “It’s important that we, as local councillors, are always out and listening to our communities. Residents are telling us they are concerned about the state of the borough, anti-social behaviour, fly-tipping and safety on Church Path.

“I’ll continue to raise all of these issues with the council and press for practical solutions.”

Joining the campaign session, Cllr Oliver Gerrish said “it’s important that we show residents in Thurrock that, whatever the weather, we will continue to be out there supporting them and campaigning on the issues that matter. I’m very pleased to be supporting Martin today, who is doing a great job for residents along with the other local councillors.”

He continued, “Now more than ever, with a Tory administration in charge, Thurrock needs a strong local Labour Party to ensure that someone is standing up for residents in the face of some major cuts to come.”