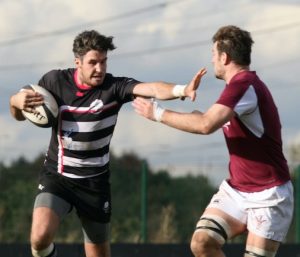 A draw in rugby is unusual, Thurrock drew last week and the same happened again conceding 7 points very late in the game to again concede victory. After an awkward journey due to road closures the early morning fog the sky cleared and there was bright sunshine over Henham, with little wind and firm conditions it was near perfect conditions Thurrock were first on the score board after 5 minutes they had worked an overlap on the left and Troy Michie dotted down in the corner for an unconverted try to go 5 points up. Walden hit back 10 minutes later as they worked the ball deep into the visitors 22 with several phases of possession, Mark Kimberley was on hand to break a couple of tackles to barge his way over the line.

Full back Tom Price converted to put Walden ahead at 7 – 5. The lead was relatively short lived as Jake Barrand kicked a penalty as Walden strayed offside 7- 8 and then on the half hour mark Freddie Russo scored a well worked try as Walden ran out of cover, Barrand added the conversion to stretch the lead to 15 -7 Walden were looking strong on the counter attack and it was from deep inside their own half that they worked the ball wide to winger Nash and he raced forward towards the half way line and with the cover coming across put in a grubber kick that bounced out 35 metres from the try line. Thurrock missed their line out jumper and Walden flanker Stapleton was first on to it at the back of the line out and was quickly striding into the 22 he rounded the first defender and threw a good pass to scrum-half Marshall who out-paced the covering defence to go over in the corner for Walden’s second to leave the half time score Thurrock leading 15-12

Walden had the better of the opening exchanges of the second half but despite 10 minutes of pressure could not add to their score Indeed it was Thurrock who extended their lead with 2 well taken penalties from Jake Barrand to go 21- 12 up with an hour played.
The home side came back strongly some good drives round the ruck meant they gradually got closer and Marshall then got his second when he spotted a gap and dived over from close range. 17- 21 with 10 minutes to go.
Barrand scored another Thurrock penalty almost immediately, from the restart Walden failed to release the ball and Thurrock stretched the lead back out to 7 points.

But the home side were not finished regained possession and this time they spun it wide and left winger Nash used his power to fend off two defenders and then his pace to round the full back to score under the posts for the Bonus point try putting Walden level with 4 minutes to go.

There was still time the home side gaining a penalty wide out on the 10metre line and they elected to kick but fortunately for Thurrock it dropped short. Both sides tried in vain to work another opportunity to win the game but had to settle for a draw.
Walden were probably slightly happier of the two teams as they gained 3 points to Thurrock’s 2.

Thurrock entertain NORTH WALSHAM at Oakfield this week kick off is 3.00pm