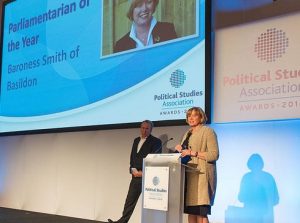 AT the Political Studies Association’s (PSA) 15th Annual Awards Ceremony held on 29 November in Westminster, it was clear that it was not just politicians that have shaped the political agenda of 2016.

The PSA recognised campaigners, artists, academics and the media as well as those in power, for their outstanding contributions to the study and conduct of politics in this extraordinary year.

Among the recipients was Baroness Smith of Basildon

Baroness Angela Smith of Basildon, Labour’s Leader in the House of Lords, was named Parliamentarian of the Year for “harnessing the second chamber in challenging the government and holding it to account on a number of significant issues, particularly in light of ineffective opposition in the House of Commons.”

Baroness Smith, the fifth consecutive woman to be named Parliamentarian of the Year by the PSA, said: “Being in Opposition is tough. But in the House of Lords, Labour peers have been dedicated in our work scrutinising government legislation and doing what we can to take the sharpest edges off ill-thought out and damaging policies.”